Our official remit is To advance the education of the public in the sciences, practice, and history of aviation, by the support, maintenance, and advancement of the charitable work of the aeronautical section (“The Collection”) of the Richard Ormonde Shuttleworth Rememberance Trust. 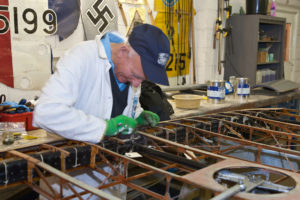 In its role of helping the Shuttleworth Collection to acquire, restore and maintain items of historical value at Shuttleworth (Old Warden), there is an immense variety of tasks to be undertaken – especially in assisting to keep the aircraft flying and the vehicles in a roadworthy condition.

Many of these are carried out by small groups of SVAS volunteers; those members who are not working volunteers nevertheless make an invaluable contribution to the welfare of the Collection by their subscriptions and donations.

The volunteer engineering work covers assisting with major overhauls, making parts which are no longer available (from anywhere and at any price), restoration, routine maintenance and repairs. They work alongside and under the supervision of a small group of resident engineers of the Collection. Without their input the Collection would be hard put to survive, let alone put on flying displays.

On event days volunteers help to tow aircraft in and out of hangars, refuel aircraft, take the older machines to their take off points, others hold onto the wings to steady their progress when taxiing. Volunteers also parade the vehicles along the flight line, often in period costumes. Away from the airfield, they sell programmes, man stalls selling surplus goods etc. Other members take small groups on tours of the flight line. 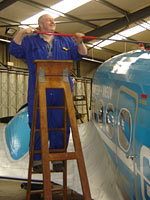 There are other volunteers who take part in tableaux at most events, and out of the airshow season we have two groups of volunteers who clean the muck and dirt off the aircraft – often there isn’t time to keep them spick and span during the show season, particularly operating from the grass (and, inevitably, mud) of Old Warden Aerodrome.

The Society has donated many hundreds of thousands of pounds to the Shuttleworth Collection, including funding the purchase of several aircraft. These are the Percival Provost, de Havilland Canada Chipmunk, Westland Lysander and Piper Super Cub.

What You Can do

We are always in need of new blood to help out – and you don’t need to be an engineer! There is just as much work to be done in other areas, and we have volunteers who clean aircraft, maintain buildings, keep the airfield clean and tidy, act as tour guides or librarians, etc. If you can spare some time on a regular basis, we’d love to hear from you.