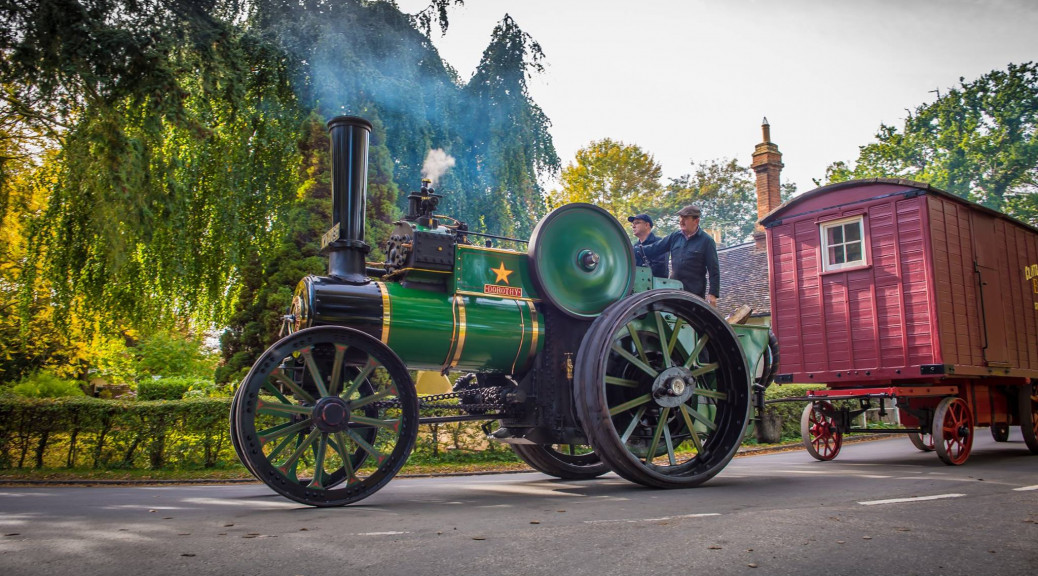 This year, the Collection was invited to bring our steam engine Dorothy to the Stotfold Mill Steam Working Weekend on the 7th and 8th October. With approvals from Trustees and staff given, and volunteer’s annual leave approved from their employers, the team was assembled led by vehicle manager and experienced operator of steam vehicles Stuart Gray. It was decided that Dorothy would take with her the living van and farm trailer, for providing accommodation and for carrying additional water and coal. 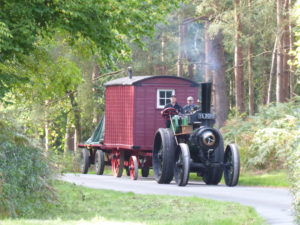 As Dorothy had to be on site and on display by 9am on Saturday, it was thought best to set off the day before the event. Friday 6th October arrived and once Dorothy’s fire was lit, the morning was spent oiling and greasing wheel bearings and fitting a spring to the steering chains to take up the slack as well as attending to the modern safety necessities of the fitting of an amber warning light. 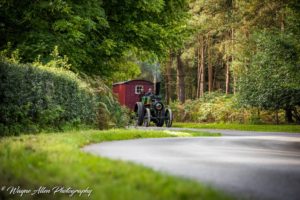 With a full tender of water and the safety valves lifting, Dorothy, driven by Archie Boyle and steered by Stuart Gray pulled out of the main entrance to the Collection onto the road at 2pm heading towards Old Warden village accompanied by Matthew Studdert-Kennedy and myself in the Collection’s Transit and Wayne Allen with his camera to capture the event. This was the first time in many years that Dorothy has been out on the public highway and it presented a number of different challenges to pottering around the Shuttleworth site. The first challenge was other road users deciding to pass at the most inappropriate places whilst heading through the village, perhaps they were keen to see Dorothy from the front! The next real test was the climb out of the village over the Warren on the road to Southill, a test that was passed with flying colours. From Southill, we headed towards the Green Man at Stanford where we stopped to check bearings and top up oil lubricating pots (no liquid refreshment for the team). Henlow was next, which we arrived at shortly after school had finished, as such we were expecting delays, but WE weren’t held up. Heading out onto the A507 was a new experience, thankfully the road is wide enough for traffic to pass easily. After a second stop for a top up with water from the trailer and more oil we headed through Stotfold and down to the Mill arriving on the field at 5.30pm and took our position with other engines and living vans. 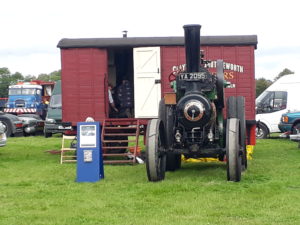 Show days were Saturday and Sunday where we had many visitors to the living van, both familiar faces who were surprised to see us at the event and many faces who had yet to discover Shuttleworth. Many flyers were distributed and so hopefully a number of these visitors will return for engineering open weekend and events next year. Over the course of the weekend catering, in the form of jacket potatoes, was provided by Dorothy and her smokebox (125oC for 3 hrs – mmm, perfect).  On Sunday we were joined by Alec, who is a member of the National Traction Engine Trust’s Steam Apprentice Club, and his Father. Alec helped with the cleaning out and oiling during the day. 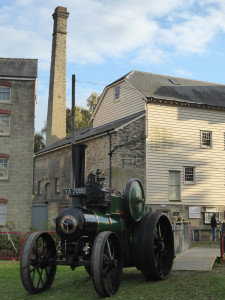 Monday came around and it was time to go home. Trailers had been hitched up to Dorothy on Sunday night, tubes and ash pan cleaned out, coal and water filled up ready for the 9am departure.  Archie Boyle was resident in the living van for the weekend and had lit Dorothy’s fire at about 6.30am so by the time the rest of us arrived, she was ready to depart. This time it was Archie and myself driving and steering respectively. After a quick confirmation of the route back we set off at 9am on the dot. The first challenge was the short hill up for the right turn onto the main road through Stotfold. There was no way we were going to stop at the junction so our support crew, Stuart Gray and Matthew Studdert-Kennedy held up the traffic for us to carry straight on safely through the junction. The return journey followed the same route except a slight deviation via Clifton rather than Henlow High Street. After a water and oiling stop at Southill, we were ready for the final assault of the climb over the Warren and down into Old Warden. The climb from Southill to the summit of the Warren is much longer that you think, modern cars just don’t notice most of it.  Just before the crest of the hill Stuart walked along side us and shared some of his knowledge….. “You don’t want to crest the hill any faster than you want to be going at the bottom” followed by “remember that you will need to use the brake and not just the reversing lever to slow you down”.  Dorothy does have a brake, it is a series of poplar blocks inside a metal band that is tightened around a metal drum on one of the back wheels. Fortunately it works surprisingly well! The final part of the training was to stop Dorothy on the descent into the village – this we did in a much shorter distance that I thought possible. Arrival back though the Collection gate, under the watchful eye of some of the engineers, was at 11.58.  Travelling time for the return journey was 2hrs 40 minutes to cover 10.2 miles at an average speed of 3.84mph. On hearing this, Jean Munn, Chief Engineer and Collection pilot, was heard to observe that it made using a Fiesler Storch look a viable proposition.

This trip certainly proved that the Trust’s investment in Dorothy’s future by having her drive gears and associated bearings repaired, recut and remade was money well spent. For a 103 year old veteran of the First World War and a converted road roller, she performed very well. 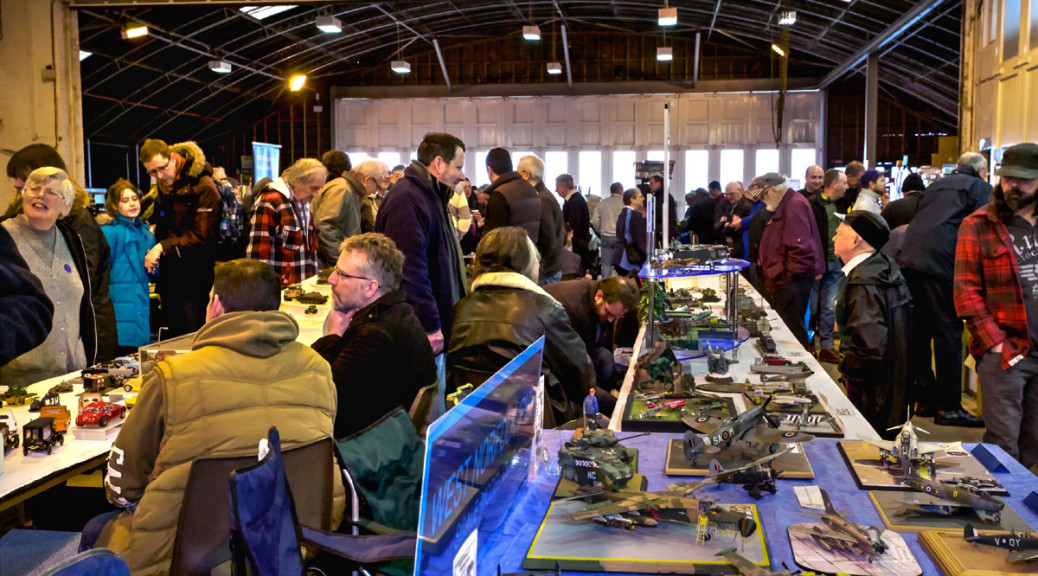 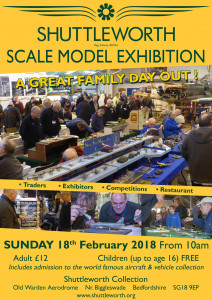 Bookings are now open for exhibitors and traders at the ninth annual Shuttleworth Scale Model Exhibition to be held on Sunday 18th February 2018.
The event will follow a similar format to previous years. Exhibitors and traders will be located in the engineering hangar, which features heating! The Collection will be open on the day and reduced admission prices will allow visitors to view the Collection and the model event. There will be a modelling competition, trade stands and refreshments available on the day, within our excellent restaurant.
If you would like to apply as an exhibitor or trader, please fill in the relevant application form below.
Model Day Exhibitor Application
Model Day Trader Application 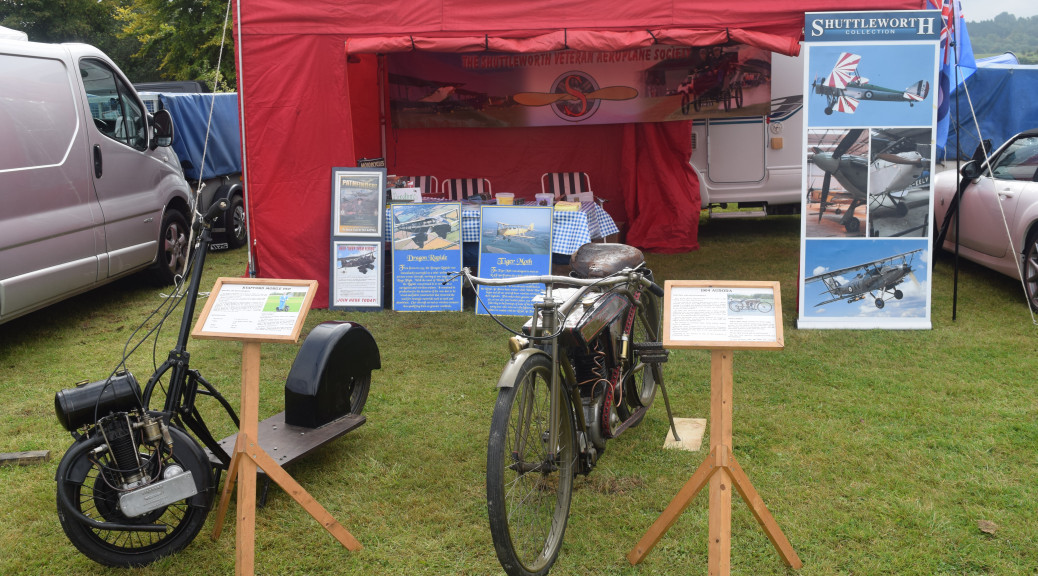 The Shuttleworth Veteran Aeroplane Society volunteers have been back in the heart of Buckinghamshire at the Kop Hill Climb again this year.  This year’s team once again included Richard Martin and myself, as seasoned attendees, with Josh Firby and Martin Oldham joining us for the first time (though I doubt it will be their last time). 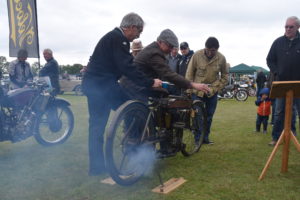 The event started in 1910 but was closed following a series of accidents on the hill, but not before it had become a major event on the sports car and motorcycle calendar; thus attracting the likes of Malcolm Campbell in his 12hp Talbot Blue Bird and Count Zborowski in the 8 cylinder Ballot, recording the fastest time in the aero-engined motor with a time of 26.8 for the competitive section.  The motorcycles of the day were also included and fared somewhat better on the hill, with Freddie Dixon recording a competitive section time of 22.8 on a 736cc Douglas – an amazing 81mph

A final accident in 1925, involved a spectator being hit by an inexperienced driver and ending up with a broken leg.  An RAC Steward stopped the meeting and a week later a statement was issued by the Auto-Cycle Union revoking the event permit

The Kop Hill Climb re-opened in 2009 as a non-competitive, fund raising event and has become internationally renowned, seeing in excess of 15,000 attendees and around £240,000 being donated to local charities and community projects.  The main aim is to recreate Kop Hill’s glory days of the 1920/30’s and enable drivers and riders to experience the thrill of the hill. 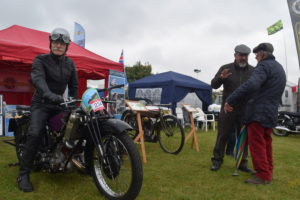 As the Vehicle Sections motorcycle specialist, it is hardly surprising Richard has his own vehicles and he selected a 1929 Scott Flying Squirrel motorcycle with its 500cc twin-cylinder engine to tackle the hill.  In addition, he took along the Collection’s 1904 Aurora and 1919 Stafford Mobile Pup as static exhibits; the quirkiness of both generating significant interest from visitors and other participants.

Josh was also fortunate enough to ride up the hill, not once but twice.  The first time on a 1928 Scott Flying Squirrel owned by Bob Woodman, and the second on a Velocette KTP 350cc own by John Buckingham; another regular at the climb and also the person behind the Sunbeam Owners Club. 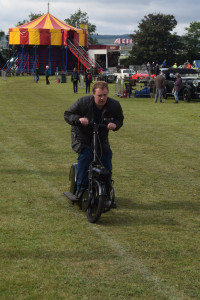 The reasons SVAS volunteers attend at external affairs like this is to both support events with a common theme and also to encourage a more diverse range of visitors to come and visit The Shuttleworth Collection.  All 4 of us spent the majority of our time talking to visitors at the stand, advising on the exhibits but also encouraging them to come to Old Warden and experience not only the history of flight and the many unique aviation exhibits, but also to see the wider range of vehicles from vintage bicycles and carriages, family exhibits and vehicles that Richard Shuttleworth has taken on the prestigious London to Brighton Car Run.  We further promoted how much visiting an airshow has become a family event, with the opportunity to view the Shuttleworth’s family home and Swiss Gardens.   As the timing of the Kop Hill event was during the lead up to The Spirit of Shuttleworth Race Day on the 1st October, we were also able to encourage some of the Kop Hill drivers and riders to register for the sprint down the runway at our own event to be held two weeks later and was great to see familiar faces enjoying our event in spite of the weather. 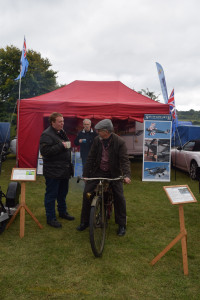 Thanks once again go to Richard for organising our participation in this event.  It’s a fairly small but very friendly affair and one of my favourites on the calendar.  Thanks also to Martin and Josh for giving up their time through the weekend to put Shuttleworth at the forefront of another motoring classic.

September’s winners of the 500 Club have been drawn:

If you would like to take part in the 500 Club, then download the application form and return it today!